In nature, when crows band together in cooperation, they can take down far more aggressive, competitive hawks. So too, the power of cooperation and banding together to fight a clear common enemy are prevailing forces for humans, and these conceptual stories described in my upcoming book, INSTINCT, are playing out in real-time on today’s stock market.

Amateur investors, many of whom came together on Reddit, have found that divisions that may once have separated them, (i.e. race, gender, or politics) have disappeared under the banner of a bigger call – a bigger “hawk” to fight.  Sticking it to “the man” has been the unifying call behind the unlikely wave of often underestimated cooperators. The cooperating underdogs are currently dominating the more individually influential hedge funds and driving the stock market in ways experts have never before seen. When it comes to GameStop, the power of cooperation is on full display and leaving no doubt as to why a cooperative group of crows is called a murder. 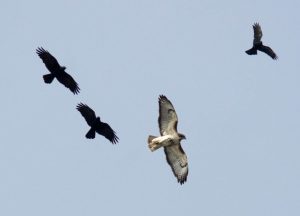